The first two reviews for the new Insidiae album!

The website Wings of Death has posted the first official review for Insidiae‘s album “Where Demons Dare” and it may be said: It’s a beauty! (The Full review is in Dutch.) You can find it by clicking the following link: http://www.wingsofdeath.net/content/36,21561/Insidiae_Where_Demons_Dare

And next to Wings Of Death, the website Flight Of Pegasus posted the second review on the album. You can find that one by clicking on the following link. (This other review is in Greek.)
http://www.flightofpegasus.gr/heavy_metal/index.php?option=com_content&task=view&id=1901&Itemid=1

Layered Reality Productions and Insidiae both thank Wings Of Death and Flight Of Pegasus for their quick reviews! More news and reviews for this record will follow in the coming weeks!
Gepost door Insidiae op 09:38 Geen opmerkingen:

Insidiae recently signed with the Big Bad Wolf Records label. The owner of the label, Tamme Oosterhof, and Insidiae are no strangers to each other, they have worked together on the Frisian Metal Massacre project in the past and Tamme has been a driving force behind arranging several gigs, and the like for, Insidiae.Insidiae's new record “Where Demons Dare” is Big Bad Wolf's first official release on CD and hopefully not the last!

Tamme Oosterhof: “I am of the opinion that we can give a boost to the Frisian metal scene and I would like to be part of that. I've a record/CD store and my label has been going on for a little while, after the Frisian Metal Massacre project a light went on in my head and I thought: “Hey, this could be done differently.” And with different, I mean I want more. That is why I attached my name to a bonafide label. I knew Insidiae was in process of making a full-length CD, so I approached the band, met with them and made them an offer. That and, personally, I really like the music, which is quite important as well and I want to support and help them where I can. After a few sit-downs the band agreed and now the first release is on its way. Amazing, isn't it?” Said Tamme Oosterhof.

Insidiae: “We have known Tamme and his label for quite some time now and we have made use of his services on several occasions. With Tamme we know exactly who is joining the Insidiae group and that is why we didn't have to think long on his offer. Big Bad Wolf Records is a small label but we are convinced that teaming-up with Tamme will have a bright future in store for the both of us. We are looking forward to working with the label and we can't wait to get started!” Said Insidiae.

Insidiae is planning to officially release their first album via Big Bad Wolf Records at the end of June, beginning of July.

Insidiae would also like to state that they are part of Layered Reality Productions and Metalization. These are organisations that help promote bands and gives the bands the option to promote themselves via these organisations. In order to promote itself, Insidiae would like to take advantage of these services.
Gepost door Insidiae op 16:18 Geen opmerkingen: 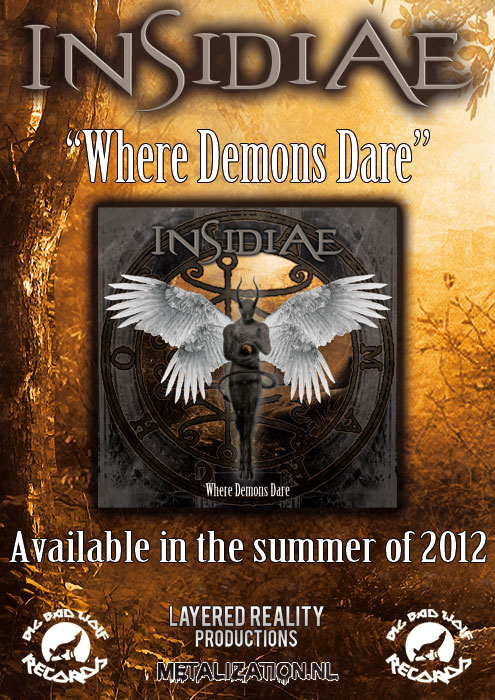 Great news from the Insidiae camp as the announced debut entitled "Where Demons Dare" is now officially produced and recorded!
The album is now on its way for pressing and the release is expected to be around the summer of 2012.
The Earlier mentioned release-date of June 2012 had to be postponed due to production issues.
An exact release-date will follow in the coming months.

The final tracklist for the album is:

The band also said recently that more music has already been written and that they are very eager to take the stage this year to promote the album. More information about this debut release from Insidiae will follow once it is available.
Gepost door Insidiae op 09:17 Geen opmerkingen:

We like to announce, that we found a new bass player! His name is Jean-Luc Nealon. With him on board, Insidiae is ready for the upcoming gigs!